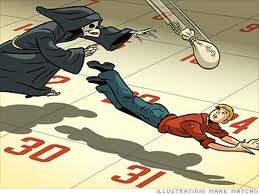 Benjamin Franklin said that the only things certain in life are death and taxes. I would add the annual announcement of Chambers rankings. And, sure enough, they are coming out soon.

I spoke with Laura Mills last week to get the answers to some of my burning Chambers questions. The first was when, exactly, can we expect to start receiving emails about which attorneys and practices will be ranked in the 2013 Guide. As of last week, she said that emails are scheduled to go out no later than the first week of February. It’s time to dig out your lists of which attorneys and practices you submitted, so you can quickly analyze how your firm did and prepare for any necessary damage control.

I asked Laura about firms or groups that participated in Chambers for the first time last year – what should marketers do if they aren’t ranked? She mentioned that the first course of action is to contact the researcher for feedback, noting that the first time around, it’s likely that there wasn’t a strong enough showing to merit a ranking, but that the practices could be nicely flagged for next year. Other issues could be related to lack of client responses or not submitting the right type of information.

The 2013 Guide will be available on Thursday, May 23rd, and it will be distributed at the book launch in New York City, as Chambers has done in the past. There won’t be too many changes to the guide – possibly some new sections and the expansion of some sections – but nothing has been finalized yet.

Looking forward to the 2014 Guide, there will be some changes to the research process. Chambers will not be requesting an early list of client referees, but they are putting internal procedures in place to address some of the concerns that led to their decision to request an early list. Laura noted that the deadline for Nationwide Appellate Law will be moved up by several months, so it doesn’t conflict with the Supreme Court recess.

Interested in getting to know Chambers better this year? Laura will probably come to the U.S. in the fall, though the exact cities haven’t been confirmed. She has also begun doing web conferences with law firms who want to learn more about the Chambers process. If your firm has a London office that can set up a video conference, feel free to reach out to Laura about setting something up.

So, are you ready to tackle another year of Chambers submissions? Do you have any questions that I didn’t cover?