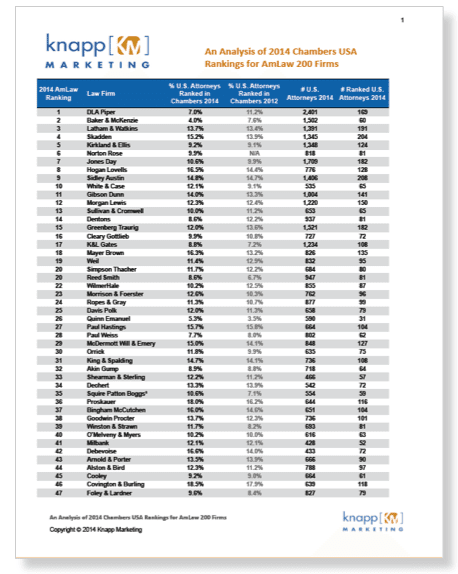 An Analysis of Chambers USA Rankings for Am Law 200 Firms

We have just completed our second analysis of Chambers rankings using the 2014 rankings, and this process made us realize just how truly rampant law firm mergers are – more on that later. We used our previous methodology in order to compare (as best we could) apples to apples. We also still stand by the previous reasons we provided for why the results shouldn’t be taken for face value.

Click here to download a chart showing, by Am Law 200 rank, each firm’s percentage of U.S. attorneys ranked in Chambers USA 2012 and 2014. Our research also includes the actual number of attorneys ranked.

When big firms get bigger, their rankings percentage drops, at least initially.

For the rest of the Am Law 100, things look pretty rosy.

There are several firms that appear to hit the ball out of the park when it comes to Chambers.

Here’s some advice from Aileen, our Chambers expert: